Fire Me Up by Kimberly Kincaid 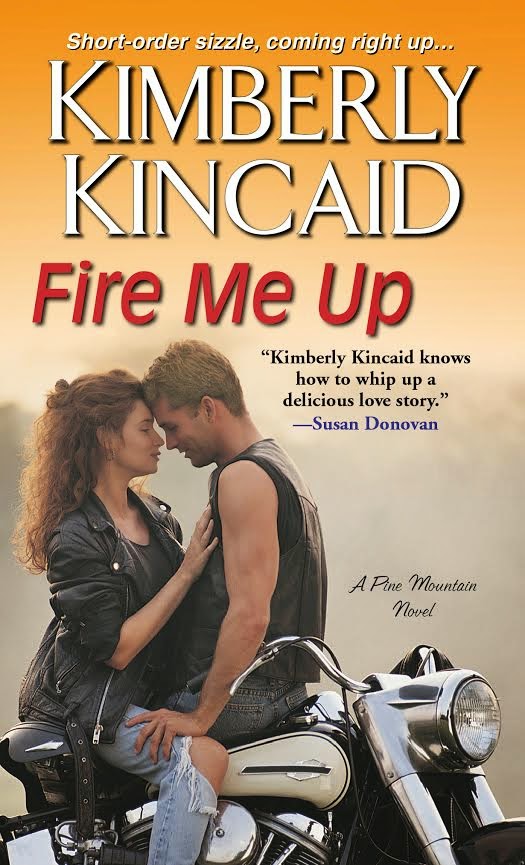 If You Can’t Stand The Heat…

Teagan O’Malley can handle a crisis. She’s a paramedic, it’s her job. But she never expected to land in the kitchen of her father’s pub, with no notice, no cash, and no room for error. The kitchen is not her favorite place. Lucky for her, she just scraped a bad-boy chef off the pavement after a motorcycle accident—and something about him says he can turn up the heat in more ways than one.

Adrian Holt has had a rough few years, and he’s not eager to get tangled up in anything more complicated than a good risotto. But with a broken arm and a head full of bad memories, he needs a challenge to keep him sane. Teagan’s dare-me attitude and smoldering mess of a bar are just what the doctor ordered. And the two of them together might cook up some even better medicine… 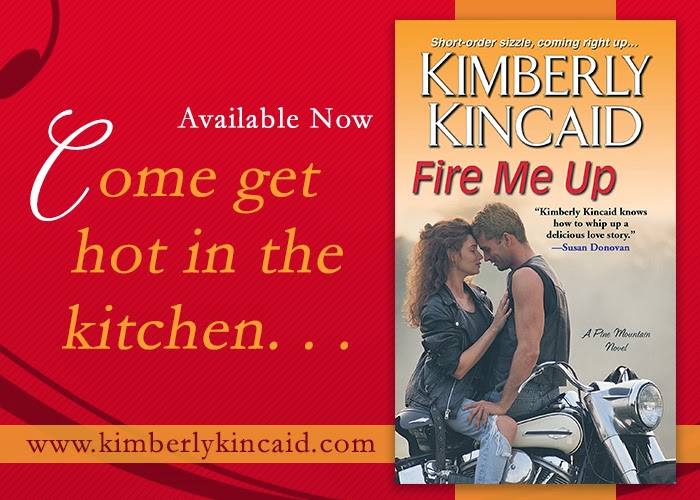 “You are stuck with me in here, Red.”
For a second, Teagan couldn’t move, couldn’t think, couldn’t breathe. But then she dropped her eyes to Adrian’s finger, still hot on her lips. She reached up to wrap her hand around his, moving it from her mouth as she stepped in close enough to erase any daylight between them.
“Did you just shush me so you could say your piece?”
Adrian paused, his body going rigid against hers even though his gaze didn’t waver. “I guess I did.”
“Mmm.” Teagan pressed up on her toes, relishing the taste of his shock as she brushed her mouth over his. “I’ll let you slide exactly once, but if you make a habit of it, you will be sorry.”
He drew back, but only enough to pin her with a wide-eyed stare. “You’re going to let me help you?”
Something that had no name loosened in her chest, and she felt her body slowly unwind against the strength of his frame as she tucked herself into his left side. Suddenly, it didn’t matter that the words bubbling up from inside her were ones that would normally scare her to death. Right now, for the first time since she’d walked into the Double Shot to find her father half-passed out behind the bar, Teagan wasn’t scared at all.
“Yeah, Superman,” she said, wrapping her arms around the broad expanse of Adrian’s shoulders and holding on tight. “I’m going to let you help me.”

Kimberly Kincaid writes contemporary romance that splits the difference between sexy and sweet. When she’s not sitting cross-legged in an ancient desk chair known as “The Pleather Bomber”, she can be found practicing obscene amounts of yoga, whipping up anything from enchiladas to éclairs in her kitchen, or curled up with her nose in a book. Kimberly is a 2011 RWA Golden Heart® finalist who lives (and writes!) by the mantra that food is love. Her digital Line series is all about the hot cops and sexy chefs of Brentsville, New York. She is also the author of the Pine Mountain series, which follows small town singles as they find big-time love. Kimberly resides in Virginia with her wildly patient husband and their three daughters. Visit her any time at www.kimberlykincaid.com or come check her out on Facebook (www.facebook.com/kimberly.kincaid1) and Twitter (@kimberlykincaid).