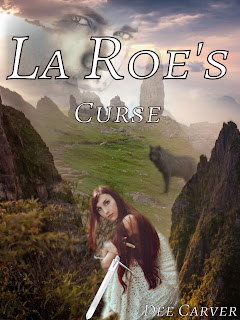 When Emerald La Roe ran away 300 years ago, she had not planned to return. However, after repeated dreams from Goddess Morrigan, Emerald finally realizes she has no choice. Emerald not only finds a magical sword waiting for her, but her dead husband also.

It seems Stefan O’ Duff wants’ reconciliation and help to cure the curse they share. Emerald would rather see him dead than be with him again, she has someone else to consider though. Her new love, Maxwell Howard a werewolf, who through sharing blood with Emerald, now faces the same fate as Emerald and Stefan. For the cure to work, Emerald has to put her hatred of Stefan aside and consent to share his bed again.

Can Emerald put 300 years of anger aside to save them or will she sacrifice all their futures and kill him as she swore to do?

Available from these stores:

Excerpt
What I saw lying on the floor stopped me dead in my tracks, there in the middle of the room was my sweet Katie. She was just lying there in something red. Knees buckling, I crawled over to her and saw the horrible gash in her stomach. The red I had seen was her blood, her life pouring out of her. I cradled her head in my lap and I began rocking her back and forth.

Even through my pain, I could hear Max coming up the front steps. I didn’t even want him around. I felt my power flare up. It consumed me and flowed all around. The only thing I could think of was no. No one was hurting her again. The world began spinning and any control I had was gone. I saw Katie’s grave again only this time it was covered in her blood. I stared down at the ugly hole, where her stomach should have been; trying to see her whole again, but my mind could not, would not, get passed the blood. It’s her blood. Someone did this to her. I swear with everything in me; I’ll kill whoever did this to her.

“Do you hear me? You are dead. You just don’t know it yet. I am going to kill you. I don’t care if I have to walk this world for an eternity. I will find you and I will kill you. Your life is forfeit, it belongs to me now, and I want you dead. Do you hear me? DEAD!” I screamed with deadly menace to the empty room and knew he had heard me. Knew I was coming for him, he also knew I would never stop until he was dead.

I barely heard the door crash in, one moment I was holding Katie and the next someone was trying to take her away from me. Without thinking, I pushed them away from us with only a thought. The room was growing brightly now, almost a forest green, the same brilliant color of my family’s crests. The light had grown so bright. It was hurting my eyes. I closed them to the growing pain.

I could feel my hair flaring out around as though it was a living fire. My last conscious thought was, “I was too late to save someone I cared about, again. Someone else was gone or dead because of me.” I knew the darkness was swallowing me and I was grateful for it, welcomed it. Knowing I wouldn’t feel the pain of her loss cutting my heart in two.

9 thoughts on “It’s her blood. #MFRWhooks”